Every minute, about 20 people experience domestic violence or intimate partner violence in the United States.  Although according to the Centers for Disease Control and Prevention the rate has dropped over the last ten years, the issue remains a significant public danger and and a very real community threat especially since many incidents go unreported and unknown.
Domestic violence doesn’t just occur between romantic partners.  Domestic violence is a pattern of abusive behavior in which someone uses physical, sexual, psychological or other types of harm against a current or former partner, an immediate family member or another relative. It can also include stalking, threats or other behaviors meant to manipulate or control someone else.

Between 2003 and 2012, domestic violence accounted for over 20 percent of all violent crime in the U.S. Intimate partner violence – meaning violence involving current or former spouses, boyfriends or girlfriends – is the most common type of domestic violence.

It’s more common in dating relationships than active marriages.  The majority of domestic abuse offenders aren’t the spouses of victims – they are most likely to be current or former boyfriends or girlfriends.  Intimate partner violence is very prevalent on college campuses, with estimates of dating violence ranging from 10 to 50 percent, the Department of Justice reports. 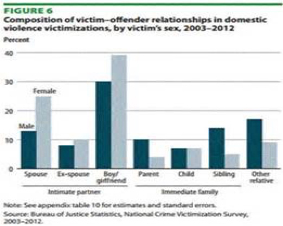 Male victims are abused by non-spouse family members at a higher rate than female victims.   More than 1 in 3 women will be victims of intimate partner violence in their lifetimes, while more than 1 in 4 men will be, according to a CDC survey.   Both men and women are most likely to be targeted by people they currently date or used to date. But the National Crime Victimization Survey showed that male victims were more likely to have been targeted by family members or other relatives than were females.   Female victims, on the other hand, were more likely than males to be victimized by their spouse or ex-spouse. 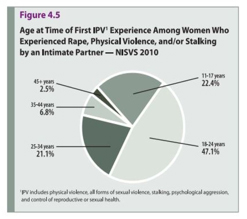 Domestic violence has dropped, but take a closer look.

The rate of domestic violence for persons 12 and older dropped by 63 percent from 1994 to 2012, the Department of Justice said. But while that may sound promising, it trails the 67 percent fall in overall violence over the same time period.

One important consequence of intimate partner violence is that it can increase a victim’s risk of contracting an HIV infection.  Not only do victims have the chance of getting HIV from a perpetrator, but research indicates that males and females who experience intimate partner violence are more likely to engage in risky behaviors, like injection drug use and sex without a condom, which can lead to an HIV infection.  Women in violent relationships also are four times more likely to contract a sexually transmitted infection than those who are not, according to the CDC.  Additionally, sexual abuse at an early age is a risk factor for females later contracting an STI, as it can contribute to risky behavior later in life, such as having sex with multiple and/or unfamiliar partners and not using condoms.

Domestic violence can seep into other areas of your life.  Domestic violence makes people more likely to suffer from depression and suicidal behavior and often negatively impacts a victim’s ability to perform well at work. Without adequate financial means, victims may find themselves trapped in an abusive relationship without enough money to leave. Altogether, intimate partner violence causes women to lose about 8 million days of paid work each year.

Despite progress, many cases of domestic violence stay in the dark. Only a little over half of cases are reported to authorities, and only about a third of victims injured in intimate partner violence receive medical care, the Department of Justice said.